It is a common misperception 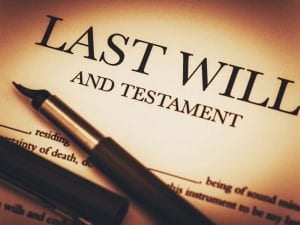 in the community that it is relatively easy to contest a will, that the estate pays the costs, and that you are more than likely going to be successful in receiving something. A recent Supreme Court decision has highlighted that this is not the case, and that testamentary freedom is still paramount in the eyes of the law.  An unsuccessful claimant is also likely to have a costs order made against them, meaning not only will they have to bear their own legal costs, but contribute towards the legal costs of the estate.

In Steinmetz v Shannon[1] the deceased’s second wife was left an annuity of $52,000 per annum (indexed) for the rest of her life. There were no children of the relationship, and both parties were financially independent. There was no suggestion of joint ownership of any significant assets. The wife had not made any contribution to the deceased’s business or the building up of his assets during his lifetime. They had been married for only 5 years (although had had an on/off de facto relationship for nearly 30 years).

The deceased wrote a new will shortly prior to his death. He made it clear he wanted his estate left intact and that it was for the benefit of his adult children  (and subsequent future grandchildren) from his first marriage. The deceased informed his wife of his intention prior to finalising the will. It was only after receiving her agreement with the provision made for her that the deceased executed the will. The evidence before the court suggested that the second wife thought the provision of the annuity was adequate at the time the will was made.

However, after the death of the deceased, the wife sought to make a claim for family provision. Justice Pembroke considered that this was likely due to the wife discovering the size of the estate and the obvious disparity between the gift to the children, and the annuity provided to her.

The Court was reluctant to interfere with the testator’s intentions, placing importance on the freedom of testamentary disposition that exists in Australia. The Court considered that the deceased was the appropriate person to consider who should benefit from his estate, and it was clear he had given consideration to the various potential claims on his estate  when preparing his will and there was no suggestion he lacked testamentary capacity.

Following a decision in the Court of Appeal, Pembroke J cited White’s JA words in Sgro v Thompson[2]  “the deceased will have been in a better position to determine what provision for a claimant’s maintenance and advancement in life is proper than will be a court called on to determine that question months or years after the deceased’s death when the person best able to give evidence on that question is no longer alive.”

Accordingly, the Court has found in circumstances like this, considerable weight is to be given to the testator’s wishes as set out in their will. This would be even more so where the will is properly drafted and it is evident that thought has been given to those likely to claim on the estate if not adequately provided for.

In order to be successful in a claim for family provision, it must be shown that the claimant (who is an “eligible person”) has not been given adequate provision for the proper maintenance, education or advancement in life in the will of the deceased[3].

In a family provision claim, the central issue (and the role of the Court to determine) is whether in all the circumstances adequate and proper provision has been made. One of the factors the court may take into consideration is the size of the estate. However, just because it is a large estate does not mean that the widow is necessarily entitled to a greater provision than what was provided for her in the will.

The widow did not express any need, only a preference to relocate and not impact on her income.

As Pembroke J said “the deceased’s estate is certainly large enough to accommodate the plaintiff’s aspirations without causing undue hardship to the defendants. But why should it? After all, it is his property, his choice and his final act. He was proud of his success in building considerable assets for the benefit of the following generations of his family. He saw it as his life’s achievement. His will referred to the assets ‘that I have worked my whole life for’.”[4] [emphasis added].

Justice Pembroke clearly sees that it is not the Court’s role to determine what is ‘fair’ or ‘equitable’, and indeed these are not the principles to be considered when determining an application for family provision. The law (and history of family provision) makes it clear that the Court is only to interfere with a will to the extent necessary if adequate and proper provision has not been made. The Court is to recognise that the will is often the last and most significant decision a person may make[5].

Central to this decision is the concept of testamentary freedom and the lengths the deceased (and his solicitor) went to, to ensure that his will was upheld. Seeking the concurrence of the wife prior to the Will’s execution, specifying why he wanted his estate left intact and the timing of his last will were all relevant factors that led the Court to hold against the wife claiming for further provision from the estate.

The court affirmed that there is no special treatment to widows, and there is no general rule that if the estate is of a sufficient size, then the widow is entitled to expect she will be provided for in such a way that she may continue to ‘live in the style to which she is accustomed’.

The Court dismissed the wife’s claim with costs.

If you believe you have a claim for family provision or generally want to find out more, then please contact LS Legal to arrange an appointment at our office in Beecroft or Sydney CBD on 02 9484 1165 or contact admin@lslegal.com.au

We get the legal work done so you can go about your life with the peace of mind that your affairs are in order.